The Miners Fraternity – Herrengrund of Špania Dolina was established as a civic association in 2003. The mission of our society is to revive and develop miners’ traditions dating back several hundred years, to collect, restore and preserve traces of mining activity in the region. Our objective is to inform the public in Slovakia and abroad about the history of copper mining in Špania Dolina.
The existence of a Miners Fraternity (Fraternitas Corporis Christi) is first mentioned in a document from the year 1463. St. Clement is the patron saint of Špania Dolina miners. Our insignia, still used today to celebrate the so called “ausschuss services”, date from the year 1701.

Between 1494 and 1546 the whole mining district was controlled by the Thurzo-Fugger Company which established the largest copper mining, processing and export operation of its time in Europe.
Through the Middle Ages, Špania Dolina was known for its water sources containing oil of vitriol (cementation water), which according to alchemist theories turned iron into copper. The cementation process was used to produce Špania Dolina glasses, exhibited today by many European museums. Cementation water was also the basis for making green colour used in frescoes and paintings by the most prominent Gothic and Renaissance artists. 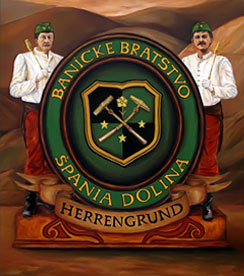 Change in appearance, Structure of pages, RSS, print out